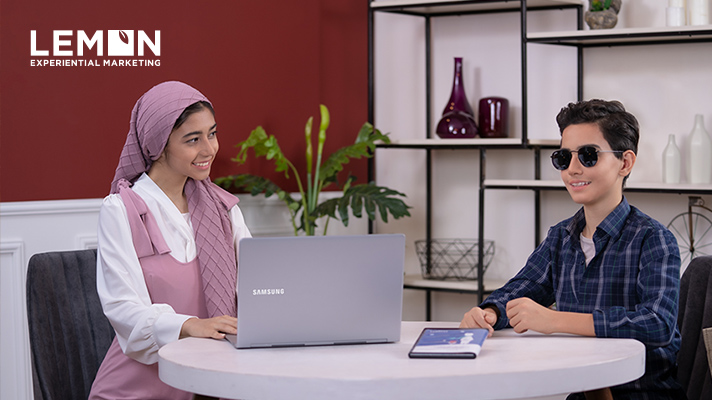 As part of its social and corporate responsibilities in Iran, Samsung launched dedicated audio libraries in cities across Iran in 2012 in order to offer services to blind and visually impaired citizens. The libraries, launched in coordination with the Iran Association for the Blind, have amassed a variety of audiobooks and other facilities in order to help citizens suffering from visual deficiencies.
Since accessing the libraries has become more challenging during the COVID-19 pandemic, Samsung has launched a new campaign called “Communion, a Color for Life”.
The following are excerpts of a conversation with Farhad Hejrat, Head of Group Corporate Marketing G/ Iran Branch, Samsung Electronics, and Ali Seraj, Creative Art Director at Lemon.

Please tell us about social and corporate responsibility at Samsung Iran.

Hejrat: Social responsibility is a pillar of Samsung’s corporate culture. Whether on the global or local scales or in countries where it has a presence, Samsung has defined social responsibility as the main component of giving back to the community it is operating in. Defining and implementing social responsibility activities and projects differ based on the needs, cultures, and conditions of the society. But in general, these activities are categorized into employment, education, health, and environment.

Samsung has engaged in extensive activities in Iran as well based on its commitments. They include creating smart schools; launching the Samsung Engineering Academy, which was built with the Technical and Vocational Training Organization with the aim of creating an environment to obtain skills and create jobs and has since held several olympiads for Iranian technicians with the support of Samsung; and launching the Samsung AUT Tech Center to identify and grow ideas and entrepreneurs in areas related to Samsung social responsibility initiatives. Concerning the environment, Samsung has made a huge impact in terms of group campaigns, the most important of which was “Your Souvenir for the Earth” that was launched with the aim of reviving the ancient Hyrcanian Forests. The campaign led to the planting of 127,000 trees in the highly valuable woods.

What was the goal behind launching the audio libraries?

Hejrat: The audio libraries are also among Samsung’s social responsibility initiatives in the area of education. When first launching the libraries, we wanted to offer educational services to blind and visually impaired people so that we can cultivate their talents and abilities and further bring them into society. Furthermore, we were after decreasing educational exclusion and help bridge the gaps. So after coordinating and consulting with the association for the visually impaired, we decided to launch the libraries in cities where people with visual impairments are more deprived of such services.

The first of our audio libraries was inaugurated in Zanjan in 2012 and we have since launched more than 15 libraries in cities across Iran. At the same time, we began developing our audiobooks and have managed to increase their numbers significantly.

In addition to boasting equipment such as embossers or Perkins Braillers that are specifically designed to assist those with visual impairments, our libraries offer courses on computers, braille, navigation, English, and handicrafts among others.

The audio libraries project was first started with children in mind, but through developing equipment at the libraries, our centers now offer services to blind youth and teenagers as well. Each library has a capacity of 30 to 50 children per day. In the libraries, after listening to tales and stories, children discuss them with their teachers. Moreover, theater workshops are organized for the children so they can act out their favorite stories.

Please tell us about the “Communion, a Color for Life” campaign.

Hejrat: After the coronavirus pandemic began and lockdowns were initiated, our audio libraries were also semi-shutdown to combat the spread of the virus. Their activities were limited to teachers answering questions and resolving issues for members. So we decided to launch the campaign in order to continue the educational process for library members and support them. The campaign, which has been designed for children, young adults, and adults, includes sending packages including audiobooks in the form of DVDs and other gifts to a number of Samsung audio library members. This way, they could continue to enjoy their education and perhaps have an easier time getting through the pandemic.

Seraj: Samsung has produced a series of audiobooks for the blind and visually impaired in three age categories. During the pandemic, when accessing the libraries physically could be a major challenge, Samsung has partnered with Lemon to launch the “Communion, a Color for Life” campaign that is inspired by Samsung’s global slogan “We’ll Get Through This Together” that took a creative path to reach its goal.

The campaign’s unique design is inspired by the story of The Little Prince. Samsung used the heartening story to promote the campaign when it was launched at its libraries. To retell this story as suitable for a pandemic, Samsung used the paradox of the prince staying on his tiny planet while a seed growing in the shape of a heart on his planet. This communion leads people to stay at home during these difficult times.

How was the packaging designed?

Seraj: Since Samsung has always focused on protecting the environment, a DVD has been put in the creative designs for all the books so they would use less plastic. The books themselves incorporate joyful and hopeful themes. The bag designed for the package can be used as a backpack, has a place to put a white cane, and incorporates luminescent colors so it can be used at night as well. In addition to audiobooks that engage the listener’s auditory sense, the package includes braille cards and incense to engage the user’s tactile and olfactory senses as well.

Have you received any feedback on the campaign?

Hejrat: We have received very positive and heartwarming feedback both from library members and from members of the association that have only emboldened us in advancing our programs and achieving our goals. Members of libraries and the association who have received the packages as part of the campaign have been satisfied with the technical and quality aspects of the audiobooks and the DVDs. We are very thrilled to have been able to provide some small solace to these citizens during these difficult times.