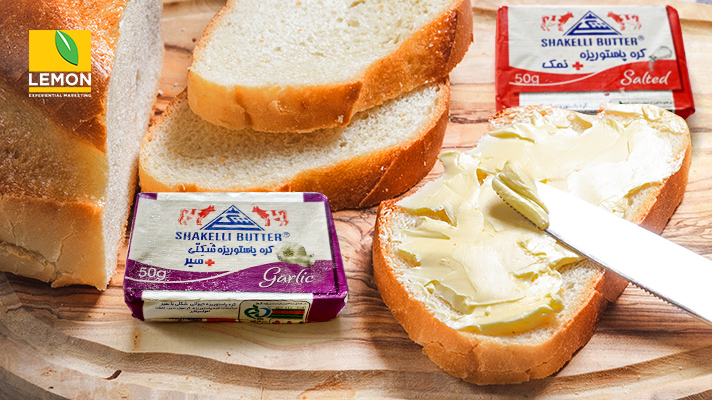 Shakelli, a foodstuff and dairy producer company has recently brought flavored butters to the market. To promote its new product, Shakelli carried out a sampling project, the ideas, and execution of which was shouldered by dnaunion subsidiary Lemon.

The collaboration between the two sides was not confined to the sampling project but expanded to encompass future projects in the fields of advertising and marketing.

Speaking about Shakelli’s recent activities Kaboli said that the company plans to carry out above the line (ATL) and below the line (BTL) advertising and marketing projects very soon.

He said, “We will be presenting new products to the market in different fields of the foodstuff sector during the current year. Shakelli is one of the first foodstuff producers in Iran and is now among the most reputable. We are the first producers of packaged butter in the country. We strive to use the latest available technology to produce healthy and high-quality products.”

Kaboli believes that sampling is among the most efficient methods of advertising which companies can carry out with a moderate budget to convey their message to potential customers.

“In sampling projects, brands in addition to introducing their products can also engage effectively engage customers. This, for sure, benefits any company. Shakelli’s new products are butters which come in garlic, vegetables, savory and garlic flavors which are all enriched with vitamins A, D, E, and K. These are used in cooking and lend a better taste to the food and create a pleasant experience. No other brand produces these butters in Iran.”

Lemon’s team said that after considering many options, they had decided to serve the butters with corn for the sampling.

The pots of corn were placed in a way that all preparation procedures could be carried out in front of the customers. Also, the pots were placed right in front of the refrigerator where the butters were kept. The amount of added butter was important for the customers to be able to detect the butters’ different tastes and to show how the perfect amount can enhance the overall taste of a dish.

Also, since the brand’s main slogan is “Always Healthy”, hygiene was our first principle in executing the project. The samplers were thoroughly trained. After introducing the new Shakelli products, they also encouraged the customers to make a purchase. This significantly increased the brand’s sales.

The sampling was planned to take place in six spots. Yet, due to the outbreak of the coronavirus, the project was run in two spots only before the Iranian New Year (March 20).

The limited version of the sampling projects got very positive feedback, therefore, we plan to continue and expand the project after the virus crisis comes to an end.

Kaboli concluded that Lemon Agency was selected from among three advertising companies. “The reason was Lemon’s detailed and diligent planning. Though the sampling was canceled after only a few days, we are more than satisfied with our collaboration. Lemon had meticulously considered all the factors required for the sampling of a food product. We certainly recommend Lemon Agency to all companies that aim to promote their products through sampling. Shakelli’s flavored butters are now available in select chain stores as well as digikala.com.”